Understanding the Adidas Slogan and Its Powerful Impact 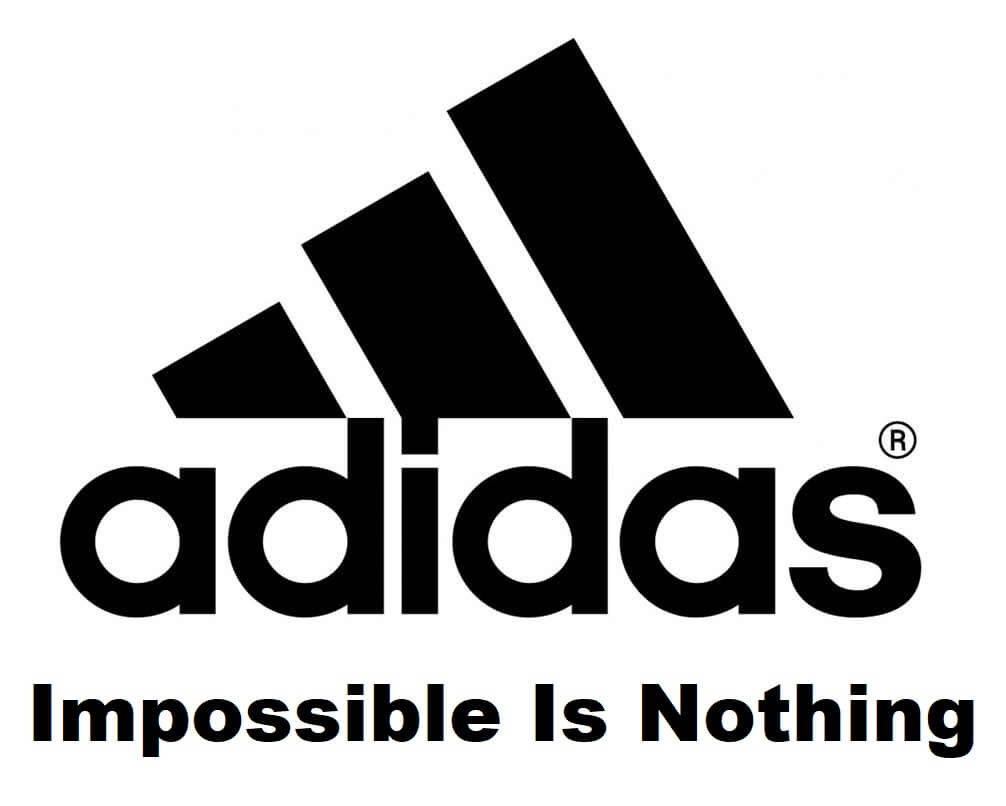 It sure isn’t, Adidas.

That’s all it ever takes – being all in. And Adidas taught us that.

You recognized these phrases the moment you read them, didn’t you? Why have these lines stuck with you, do you think?

Because they are slogans and they were created for that very purpose.

Before we go any further,

What Is a Slogan?

A slogan or tagline defines who a brand is – it defines their essence, their voice, their vision, and their values among other things.

You might say that a brand already has these components to describe it; why need a slogan?

Well, a slogan can be seen as somewhat of a mini-mission statement. It tells you about the aim the brand exists to fulfill in a short, creative catchphrase.

In this way, you would remember the brand every time you saw or heard those words.

And Adidas does not disappoint in that regard.

Whether it is the Adidas slogan ‘Impossible is nothing’ or ‘Adidas is all in,’ they get their message across – they are determined to help athletes achieve all their goals, even the ones that seem impossible to start with.

We’re going to tell you all about the slogans and their impact on Adidas’ branding in this blog post.

Let’s learn a little bit about the brand’s story, as well as their motivation and mission.

You May Want To Know About E-Commerce Marketing

Starting work on his goal to provide athletes with the best possible equipment in his mother’s wash kitchen in 1924, the founder, Adi Dassler, was a force to reckon with. The company was then called ‘Gebrüder Dassler Schuhfabrik’ or Dassler Brothers Shoe Factory as it was started by Dassler and his brother.

In 1949, they set off on their separate ways and Adidas was registered as Adi Dassler Adidas Sportschuhfabrik, which later became Adidas.

Today, the brand needs no introduction. It is a household name – ask anyone and they will tell you they either own Adidas gear or want to own Adidas gear. You know you do too!

But that didn’t just happen by mistake. While their quality and the fulfillment of the promise to provide the very best of sports gear is the primary reason for their popularity, you know there’s got to be more.

The way the company has branded itself and advertised its products to the public has a massive role to play in its popularity. Among their branding successes is the creation of the Adidas tagline ‘Impossible Is Nothing.”

Adidas’ Game-Changing Slogan – Impossible is Nothing

This is, no doubt, a very powerful message.

The fact that nothing is impossible is perhaps the most motivational message you can give a sportsman.

It is probably the best motivational message you can give ANYONE.

Because it encourages the individual to go out and chase their dreams, no matter how unattainable they seem at first.

But where did it come from?

The brand came up with the ‘Impossible Is Nothing’ slogan in 1974.

I know what you must have been thinking from the beginning of this blog post – the line sounds familiar but you just can’t place it.

But that’s why you’re here.

See, the slogan was derived from a quote by Muhammad Ali, world-famous boxing champion. The saying goes something like this: 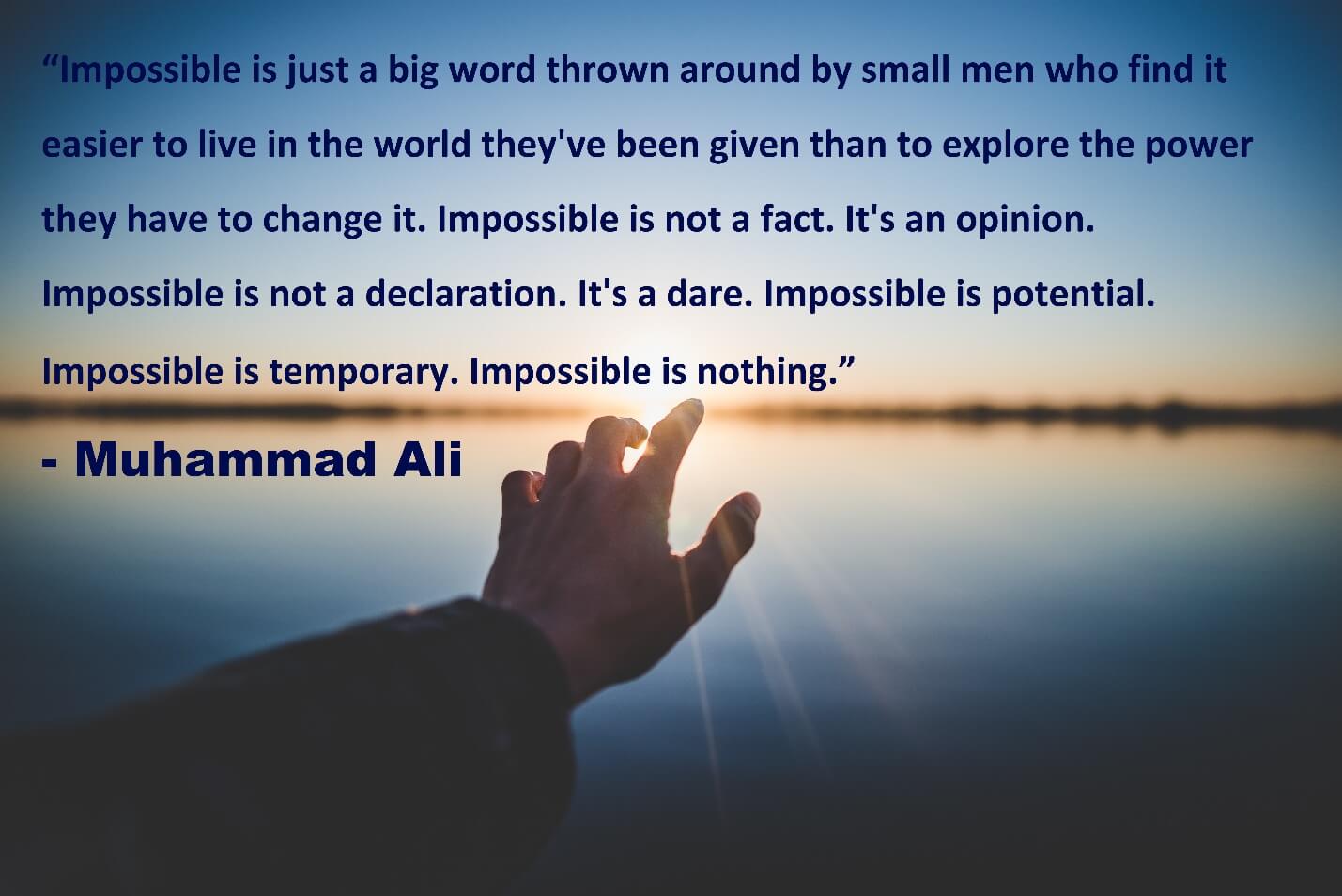 What the ‘Impossible Is Nothing’ Slogan Implies

The inversion technique that takes the more common phrase, ‘Nothing Is Impossible,’ and turns it into ‘Impossible Is Nothing’ is quite remarkable.

One meaning of the phrase is that which we have been discussing up until now – nothing is impossible. It pushes people to break all sorts of boundaries and just go for it – to reach out and grab the achievements that seem out of reach.

But it can also mean something else.

The positioning of the words can mean that the concept of impossible itself means nothing. There is no such thing.

So what is holding you back may just be your own invisible shackles because after all, ‘impossible’ doesn’t exist.

Whichever way you look at it, the effectiveness and impact of the words is profound.

Let’s come back to origin of the slogan for a minute.

The fact that the Adidas catchphrase was derived from the saying of a sportsman is quite significant – it reflects the view Adidas itself has toward sportsmanship.

But the thing is, it wasn’t just any sportsman – it was Muhammad Ali. It was a man whose moves inside the ring and philosophies for life outside the ring were both equally outstanding.

So the message had all the more meaning.

But that’s not all!

Muhammad Ali endorsed the brand, which was one of the most important milestones for Adidas.

After all, if the top boxer in the world, a highly inspirational figure in all aspects of his life, was endorsing a sportswear brand, it HAD to be good, right?

But Adidas didn’t leave it at that. They used a very smart brand endorsement and positioning approach when they created their ‘Impossible is Nothing’ campaign featuring Muhammad Ali, his daughter Laila Ali, and others.

The Significance of the ‘Impossible is Nothing’ Campaign

The campaign was launched in 2004 and left a mark on not just a young, sporty target audience but a wider demographic.

In the brand’s own words, it reflected “the attitude Adidas shares with athletes around the world – the desire to push yourself further, to surpass limits, to break new ground.”

Let’s look at two examples of how it did that.

It shows Laila Ali, Muhammad Ali’s daughter, taking him on in the boxing ring. A three-time female boxing champion taking on the legend himself.

The ad voiceover is as inspirational as it gets. Laila Ali tells us how her father, by looking impossible in the eye and defeating it again and again, has taught her to do the same. To never give up, no matter how big the challenge. And to bring it home.

And she proceeds to do just that. She wins the round and owns the ring.

This ad is the definition of persistence, determination, passion, and the drive to win.

And that is what Adidas wants to help all athletes do.

It speaks of individuals who listen to themselves and not to others. Who break barriers, not remain confined in them. Who encourage others to reach their full potential.

It speaks of individuals who don’t believe in words such as ‘can’t’ or ‘impossible’ and who go to all lengths to achieve their dreams.

And by ending the ad with the text ‘Impossible is Nothing,’ Adidas connects all the dots and gives a strong, empowering message to the world.

The ad is sheer brilliance. Adidas reflected its entire ideology by speaking about the life and legacy of Muhammad Ali. The determination to never give up. The will to keep on going despite criticism. The power to win.

That’s what Muhammad Ali embodied. And that, again, is what Adidas wants to help all athletes achieve – perfectly illustrated through the ad.

This is one version of an ad that was made as part of the campaign.

In it, football star David Beckham recounts his story of loss and defeat and how he overcame it.

He tells the listener how he came out of the darkest time of his life with the determination to be good again – to make his country and fans proud.

And how it felt when he was finally able to do that.

While telling the story, he translates his thoughts onto a large canvas. He gives the message of the importance of belief, strength, and family, as well as the role they played in his success.

These aren’t the only ads that were produced as part of this campaign. There were many more featuring over 20 athletes with the same message of persistence, courage, and the will to win.

But these three certainly are the most talked about videos, not just in the context of Adidas, but in general because of their empowering message!

The Evolution of the Adidas Campaign Slogan

In 2011, Adidas launched its ‘All In’ campaign slogan. While the Adidas ‘Impossible Is Nothing’ tagline will likely always remind people of the brand, it decided to explore new horizons with the new campaign.

This was the biggest marketing campaign in the brand’s history.

Take a look at this ad:

Overall, the gist of the ad and the message it gives is that all these people, these individuals who are heroes in their fields are ‘all in.’ They are giving it their all to succeed.

This does two things:

One – It encourages us, the viewers, to do the same.

Two – It delivers the message that Adidas is all in when it comes to giving sportsmen and women the best of the best. And that it will go to any lengths to do that.

And that is just the impact Adidas wanted.

Adidas has launched various campaigns from there onwards. ‘Unite All Originals,’ ‘Your Future Is Not Mine,’ and ‘Unleash Your Creativity’ all continued the legacy of the brand propagating positive, impactful messages.

Adidas brand and campaign slogans have a lasting effect – they enhance brand recognition and make people associate positive vibes with the brand and its products. This, as we mentioned above, is a very important reason for the brand’s success.

The taglines and campaigns encourage people to push boundaries and become the best version of themselves. They tell you to go out and conquer the world.

In addition, Adidas displays a very smart use of celebrity endorsements in its advertising campaigns by giving the audience real-life examples of people who have actually smashed records in their respective fields. This is true for the Impossible is Nothing and All in campaigns among others.

Be it Muhammad Ali or David Beckham, Katy Perry or Derrick Rose – successful individuals endorsing Adidas’ products is a reflection of the brand’s mission. And that is to believe in yourself and give it your all to come out on top.

Believe us, it worked wonders for the brand.

Thus, if you are launching a business or devising an advertising campaign, that is exactly what you should think of when coming up with a slogan.

Does it reflect your philosophy?

Is it giving real-life examples of the message you encourage and endorse?

To what extent does it match your ideology?

Take a leaf out of Adidas’ book and come up with a killer slogan like – because it might just make the impossible, possible for your brand!

Which other slogans would you like us to discuss and analyze? Let us know in the comments below and we’ll consider reviewing them next!

How Video Helps Your Brand to Find Its Voice

Get Your Free Consultation Now!