You must have observed wendy’s reshaping their mottos and catchphrases quite a lot. Haven’t you?

The brave and the courageous Wendy’s have always been experimenting with their slogans to find the ones which are tacky enough to stick. And you have found one good read on all of Wendy’s slogans and how they are making headway with them.

The story starts with the birth of a child ages ago in 1932. Having born to an unknown mother, Dave Thomas lived with a couple as an adopted child.

Thanks to dining out with his father quite frequently and working in restaurants starting at age 12, he grew a certain fondness for eating out as a child. Restaurants were one of his favorite places to go. 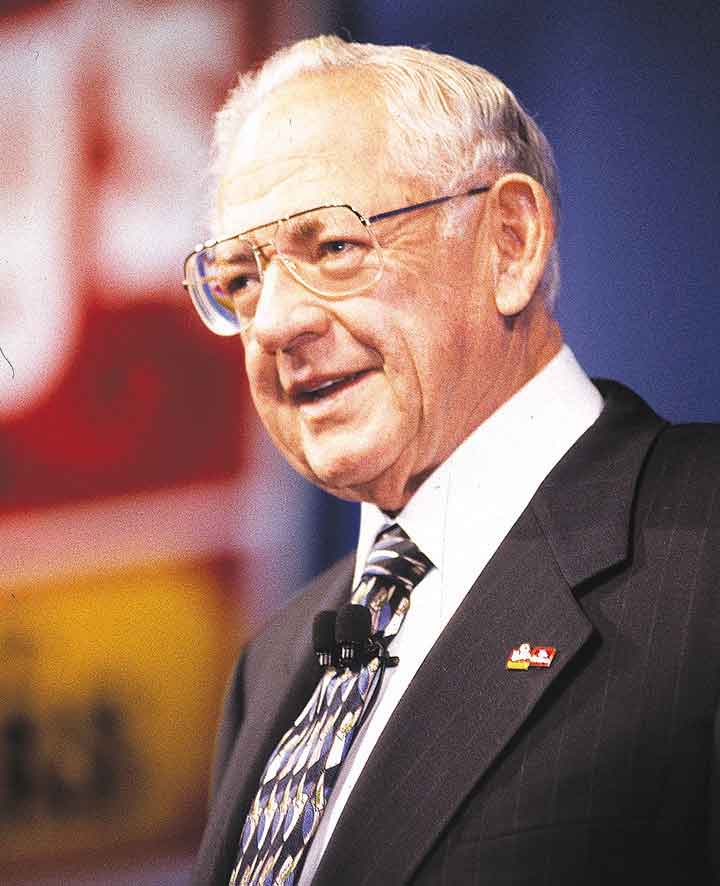 Why would that be so?

The gatherings of families at restaurants attracted him ALOT. Observing menus, interior, serving of food and every minute detail about different restaurants was his favorite pastime.

Little did anyone know that this love would make the world a better place to eat for foodies.

Not long after, on the completion of earth’s 9th revolution around the sun in his life, Dave was already an expert at *customer expectations*.

Fast forwarding many years, with the experiences of restaurants, the commitment of an army man and love he had for hamburgers, Dave started off with a restaurant in 1969 in Ohio. The restaurant specialized in hamburgers, as predicted by his love for them. He named it Wendy’s, the nick of one of his daughters.

Many many many moons later in 2018, the restaurant had a chain occupying 6,711 locations. The same small restaurant famous for old fashioned taste is world’s 3rd largest fast-food chain today. Wendy’s slogans and their evolution definitely have a part (a rather BIG PART) in this achievement.

Slogans-Welcome to the land of Good Marketing

Taking a slight shift from the story, what is MARKETING to you?

As a customer, it is what tells you about a new product or service and asks you to follow up. Right?

This is exactly what businesses aim to do when they MARKET.

Dive in with us.

The Encyclopedia Britannica explains marketing as:

“The sum of activities involved in directing the flow of goods and services from producers to consumers.”

The slogan is one of those activities, and it’s meant to stick the brand’s message in your mind even when the advertisement is over.

And when they have the following characteristics Social Media Today says they should have, you can’t escape the message.

A slogan, according to Kumail Hemani, should:

Brands improve their brand salience by sticking their name to your head using these traits in a slogan.

And you can’t help repeating such a message, slogan, or tag line of a brand, making up your mind to check them out soon.

MARKETING MISSION ACCOMPLISHED thanks to the awesomeness of the slogan and your kind consideration.

Want to read more about slogans and how influential could they really be?

Click here to read them beautifully described in our article Addidas slogan and its powerful impact or keep reading for getting back to Wendy’s motto.

Back to Wendy’s story, they played the slogans game at their best. You would say so too as you read more. 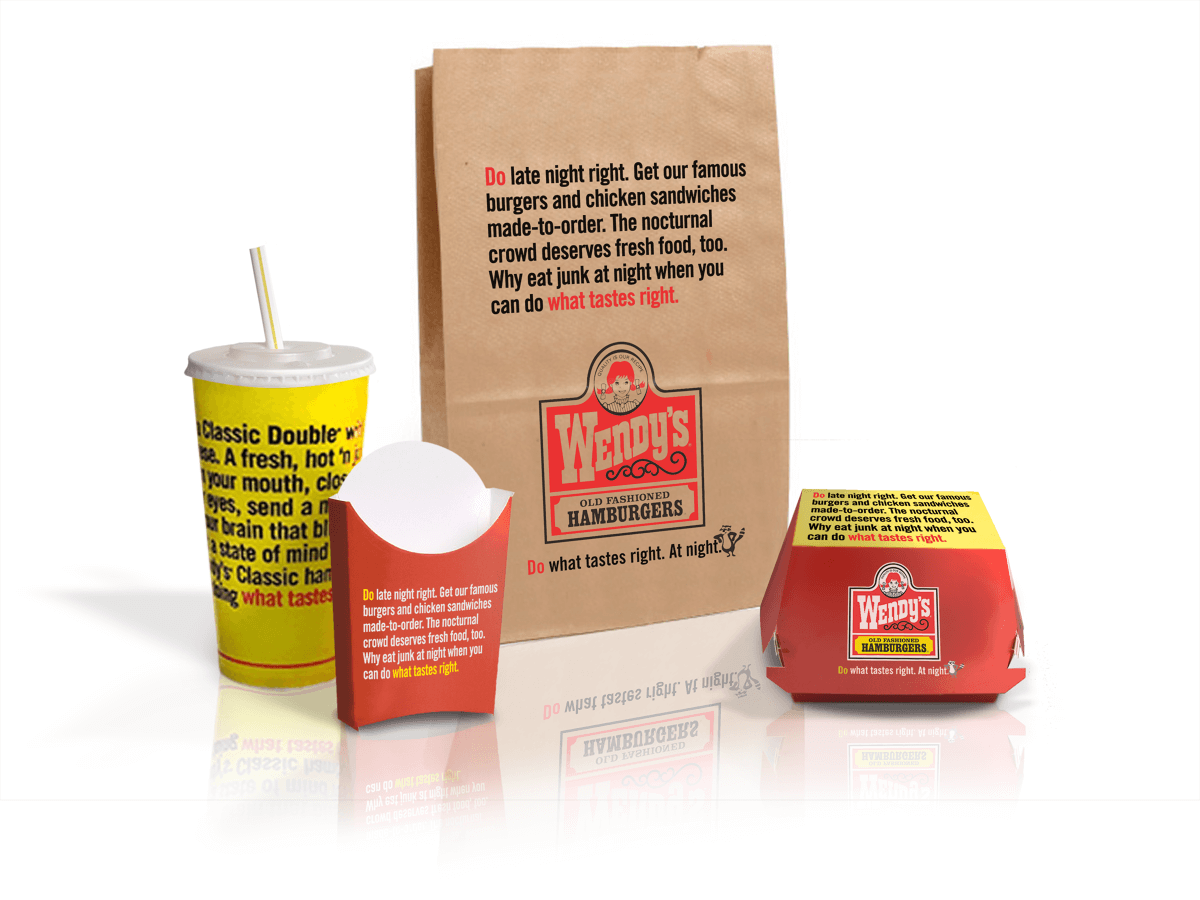 Starting from *Quality is our recipe* to *We got you*, Wendy’s have always found a point to stick in your head.

However, they changed so much over time that you might have heard a pal asking in amazement, “What exactly is Wendy’s slogan?”

But they still got it. In fact, they KILLED it with their changing slogans & advertising campaigns. But, it hasn’t been more by accident than by design.

They were working hard and pushing their luck. They have always been making honest efforts with Wendy’s slogans, as they do with their burger patties.

And what’s the result?

On your next lunch break, you know exactly where to head.

Why? Did they hypnotize you with their slogan? (You just read the answer a while ago but there’s more explanation coming next.)

Wendys slogan is the foremost reason you plan to head to their station and say Wendy’s catchphrase “Where’s the beef?”

They respond, “Here’s the beef” and get you the “juicy hamburgers.”

If this is hypnotism to you, so be it.

And for about half a century now, they are doing the magic with the world-famous “Wendy’s Slogans, Wendy’s Motto and Wendy’s catchphrases”.

Not to mention that catchphrases are not the only reason you go to Wendy’s. They say, “Quality is our recipe”, they stick to “good old fashioned taste” and innovation is their darling friend (for the longest time too).

What more could you use for your lunch or dinner? (Oh! And some of their outlets even offer breakfast as well. And that has another interesting story too, but for another time.)

Since they have mastered the art of innovation both in their slogans and meals, no denial that none of them have disappointed us. 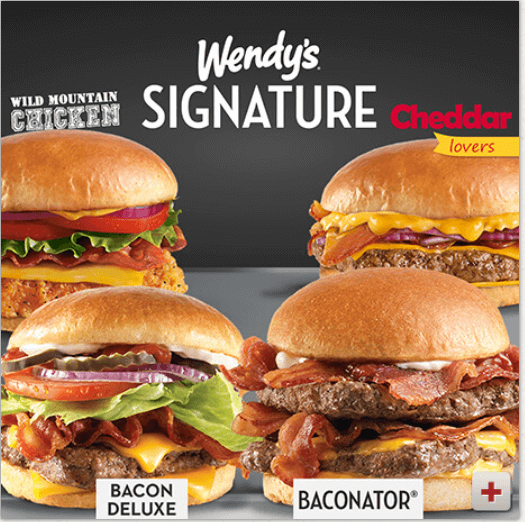 Wikipedia has issued a list of Wendy’s slogans and catchphrases. The list conveniently comprises of 30+ slogans used from 1969 to 2019:

Some of the most famous Wendy’s mottos and slogans:

Let’s talk about the most famous ones:

Quality is our recipe

Not only is this the first slogan introduced in 1969 but has been equally popular catch phase throughout Wendy’s history. Name Wendy’s, and this phrase gets the honor to be almost spelled out to you.

As Matthew Kane at HubSpot says, this truly makes Wendy a better, DIFFERENT kind of BETTER, the choice for the consumers out there. This campaign rolled out in 2016.

The ad campaign also depicts the use of fresh meat instead of the frozen alternative their competitors use; a sustainable competitive advantage for Wendy’s.

This has been one of the most famous catchphrases and had amongst the most memorable commercials, featuring a big bun with a huge square beef patty sticking out, in 1984.

As an answer to this, a new commercial campaign saying “Here’s the beef” was launched in 2011 for the new Hot ’N Juicy line of hamburgers.

The campaign started with the idea of the same great food for the late-night menu, only more affordable. The idea grew popular as you could get the best food late night at lesser the original, day-time price. The nocturnals loved nothing more!

Do what tastes right

This campaign highlighted many of the menu items and features of Wendy’s successfully. The campaign won hearts as much as almost all the others did.

What’s common in all of Wendy’s catchphrases?

While you were reading all the slogans and catchphrases and wondering about your next juicy burger, did you notice a theme?

There’s something common in almost all of these phrases.

They’re either giving you a picture of their mouth-watering meals or escorting your imagination to the land of tastes.

And what else would a hunger-stuck folk need? For most of us, we’re sold on just that!

What’s the best part of their story, both for producers and consumers?

Their progress to keep bringing you more of what you want at it’s best!

Well, as mentioned earlier, Wendy’s hasn’t been making all the progress by accident. They transitioned from a small restaurant in Ohio to a chain of 6000+ restaurants around the globe in 50 years.

And their advertisement and choice of slogans have been a good part of making them famous (and wealthier of course).

Because Wendy’s slogans have it all; they are short and juicy, they are catchy and sound irresistibly tasty.

They did not stick to one motto or slogan. Evolution and adaptation helped them to survive and thrive.

And these are the key marketing takeaways for anybody up for a short and quick but juicy marketing lesson.

Over to you, Folks!

And now when this interesting timeline is over, let us hear which of Wendy’s catchphrase did you like the most?

Say you were born in 1969 and saw Wendy’s progress all along, which of the mottos and slogans would have caught your attention? And which of them would have influenced you to buy Wendy’s?

Let us know in the comments 🙂

How Video Helps Your Brand to Find Its Voice

Get Your Free Consultation Now!